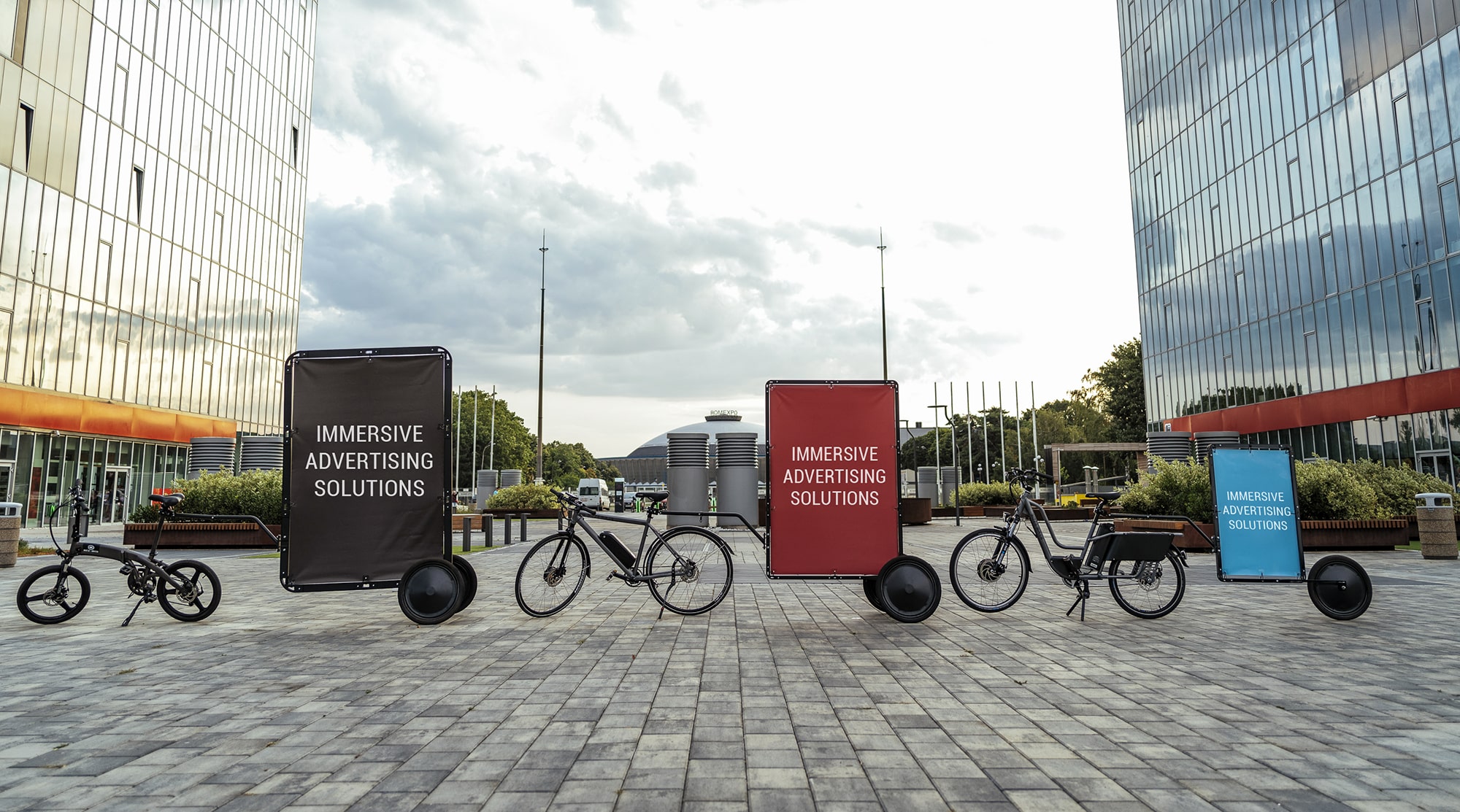 If you’re reading this guide, you’re probably either looking for a better, more cost-effective way to advertise outdoors or you’re already familiar with your options and you want to learn more about them.

In both cases, this guide covers everything you need to know about mobile billboards in order to make an informed decision regarding your advertising goals.

What Are AdBicy Mobile Billboards?

It’s often said that “all the best things come in three” and now we can say the same thing about the AdBicy bike billboards.

With a size of 1080 mm x 1570 mm and weighing 19 kg, AdBicy M is a medium-sized mobile billboard that can be used as a bicycle advertising trailer or as a stationary billboard.

Mobile billboards are generally used because they are able to deliver a message in places where traditional means of advertising are overlooked, impractical or not as effective.

They also provide a channel that isn’t cluttered by other advertisements and, since they’re mobile, they can easily avoid being seen near competitors.

Many advertisers also find them advantageous because the message is less likely to be tuned out by pedestrians and drivers, compared to other advertising media.

Mobile billboard advertising is effective because it’s visible, difficult to ignore, and memorable.

In a national survey conducted in United Kingdom, Capitol Communications Group found that 81.7% of those polled recalled images they saw on a moving multi-image sign. This is compared to a 19% retention rate for static signs (source).

In an US survey, Product Acceptance and Research said 94% of respondents recalled seeing a specific mobile billboard, with 80% recalling the advertisement; the billboards resulted in a sales increase of 107% (source).

Mobile bicycle billboards are also able to go directly to their target audience, unlike static ones.

Their effectiveness is also increased by the ability to repeat routes, ensuring that an advertiser’s message is not only noticed, but that information is retained through repetition.

Therefore, once bought, AdBicy billboards can be used in unlimited advertising campaigns, in unlimited ways and with minimal costs, since the only things that will need addressing are the advertising messages and, consequently, the vinyl banners.

Beyond being mobile, an AdBicy billboard is also versatile and multifunctional.

By using a banner made of a block-out material, the advertising space can be maximized to two separate areas that can be used for either complementary or distinctive advertisements.

For example, AdBicy L comes with up to nine different configurations, while AdBicy M​ offers seven.

They can also be used as bike billboards or towed by a promowalker with the help of our adwalker kit.

What Can Be Promoted Using AdBicy Billboards?

From guerilla marketing campaigns to a more traditional approach to advertising, AdBicy billboards can be used to promote virtually everything: new product launches, sales and promotions, grand openings and events etc.

What questions do you have about the AdBicy bike advertising trailers? Contact us and we’ll be happy to answer them.

Opening a Coffee Shop? Be Sure to Get These Six Things Right First
Scroll to top